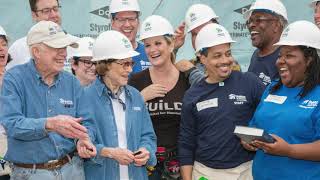 (CORRECTION: This story has been updated. Jimmy Carter will become the country’s oldest living former president on March 22. An earlier version of the story, citing information from the Carter Center, said that Carter would reach that milestone on March 21.)

When Jimmy Carter left office in 1981, the return home to Plains was not easy. His once flourishing farming business was more than $1 million dollars in debt, and he faced the prospect of selling the land that his family had been on for 150 years.

Then a friend pointed out that Carter, at the tender age of 56, could expect to live at least until 80-years-old.

“I had one disturbing reaction,” Carter wrote in his 1998 book, “The Virtues of Aging.” “What was I going to do with the next 25 years?

Let’s just say a lot — from establishing the Carter Center and being awarded the Nobel Prize to building Habitat for Humanity homes and writing more than two dozen books.

March 22, 2019, marks yet another milestone. While it is not his birthday, Carter becomes the oldest living former president in United States history.

“We at the Carter Center sure are rooting for him and are grateful for his long life of service that has benefited millions of the world’s poorest people,” the center said in a statement.

Daria Labinsky, an archivist with of the Carter Presidential Library, said nothing special is planned to mark the event at the library.

After the country’s first president, George Washington, lived to be 67, only a handful of others have lived into their 90s.

Already, Carter had set for presidential record for living the longest number of years out of office, at 38 plus. But then again, he started the job young. When he was elected in 1976, Carter was only 52-years-old, making him the 17th youngest elected president in history. The median age for accession to the presidency is 55 years and 3 months.

“What could possibly be good about growing old? The most obvious answer, of course, is to consider the alternative to aging,” Carter wrote in 1998. “But there are plenty of other good answers — many based on our personal experiences and observations.

Sure, there have been scares along the way.

In August 2015, Carter revealed that doctors had found four small melanoma lesions on his brain. The discovery followed the removal of a lesion on his liver that took about 10 percent of the organ. He began receiving drug treatments, along with radiation therapy, and said at the time that he would cut back significantly on his schedule.

He continued receiving treatments until the following February when doctors had told him they were no longer needed, he said.

In 2017, Carter was briefly hospitalized in Winnipeg, Manitoba after he became dehydrated while working on a Habitat for Humanity building site. He remains active.

Many historians consider him one of the greatest former presidents ever — if not the greatest.

Following his bitter 1980 defeat at the hands of Ronald Reagan — or his “involuntary retirement,” as he calls it, becoming the first full one-term president since Hoover to lose reelection — Carter turned himself into something else.

In 1982, he started the Carter Center in Atlanta to advance human rights and promote democracy. The center mediates conflicts and monitors electoral processes in support of free and fair elections.

Carter traveled the world for elections and worked with the Carter Center to eradicate diseases. His hard work during post-presidential life was recognized in 2002, when he was awarded the Nobel Peace Prize.

‘As we’ve grown older,” Carter wrote of himself and wife Rosalynn, “the results have been surprisingly good.”